Located in the Indian state of Manipur, Loktak lake is the largest fresh water lake in Northeast India. It is also called the floating lake due to the floating phumdis (floating island or heterogeneous masses of soil, vegetation and organic matter, at various stages of decay). The etymological meaning of Loktak is Lok  means ‘stream’ and tak means ‘the end’. The Keibul Lamjao National Park is situated in the southeastern coast of this lake. The national park is also the largest of all the phumdis in the lake.
The Loktak lake also plays an important part in the economy of Manipur. The lake acts as a source of water for irrigation, drinking water supply and hydropower generation. It also serves as a source of livelihood for the fisherman who lives on the phumdis and the places surrounding the lake. The lake ecosystem has suffered severely due to the human activities near the lake. Presently, a population of 100,000 people lives in areas surrounding the lake. 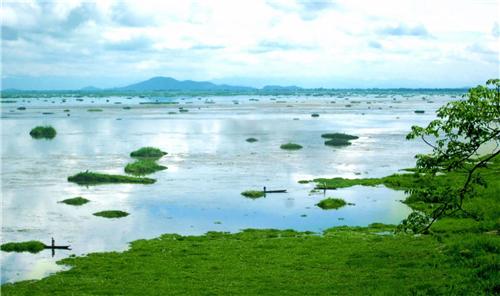 During a scientific survey carried out between January 2000 and December 2002, a rich biodiversity with habitat heterogeneity has been recorded. The lake’s rich biological diversity consists of 233 species of aquatic macrophytes of free-floating , rooted floating, emergent and submergent leaf types

Rare animals that can be found includes the sambhar, Indian python and barking deer. The Brow-antlered deer or the Sangai, one of the most endangered deer can be seen in the Keibul Lamjao National Park that is located in the shore of the Loktak lake. Apart from these, other animals that can be found includes wild bear, Rhesus monkey, Muntiacus muntjak, Hoolock gibbon, Indian civet Viverra zibetha, marbled cat stump-tailed macaque and Temminck's golden cat.

Every year 1,500 tonnes of fish is yielded from the lake. Millions of fingerlings of Indian and exotic major carps has been introduced by the State Fishery Department. Varieties of new fish introduced in lake were silver carp, grass carp and the old varieties of the local fishes like Anabus testudinius (ukabi), Channa punctatus (ngamu), pangba, tharak, Anguilla (ngaril), and ngashap now show a declining trend. 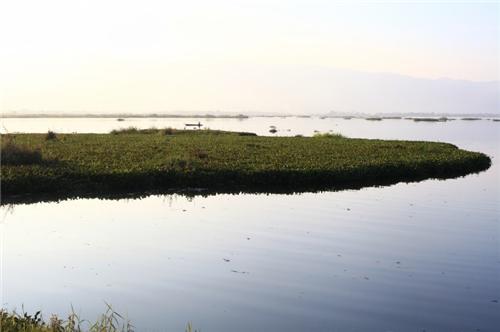 The tourists can enjoy the beautiful view of the lake. There are several Islands in the lake and the most popular among them are the Sandra and Phubala. These islands offers various facilities to the visitors.

The Sendra Tourist Home on the Sandra island, located on the middle of the lake is a favourite tourist spot. The tourist home also have a Cafeteria, where tourists can enjoy coffee and enjoy the beauty of the place. Another major tourist spot is the Phubala resort, located on the Phubala Island. The Moirang town is situated on the border of the Loktak lake. The Indian National Army Museum located in Moirang the town is another tourist destination. The exhibits in the museum includes  photographs, letters, badges of ranks and different things associated with the Indian National Army. There is also a bronze statue of Netaji Subhas Chandra Bose in uniform in the lawn.

Explore more about Tourism in Imphal