Imphal, the capital city of Manipur is rapidly turning out to be one of the most developed city of Manipur. The city is famous for its hill ranges and its beautiful valleys. The city is full of greenery. Imphal is also popular for its lakes and swamps that are an important part of the geography of the city.

Imphal is bounded by Myanmar in the east, Assam in the west, Nagaland in the north and Mizoram in the south. Imphal lies between 24.82°N latitude 93.95°E longitude in extreme north eastern India. It is located at an altitude of 786 meters above sea level.  Imphal is located in the valley of the Manipur River and is surrounded by the northeastern Hills. The Imphal Valley is a rich geographical region with numerous rivers draining through it. These rivers like the Iril, Khuga Imphal and Thoubal start from the hills surrounding the region and flows towards the north-south direction. 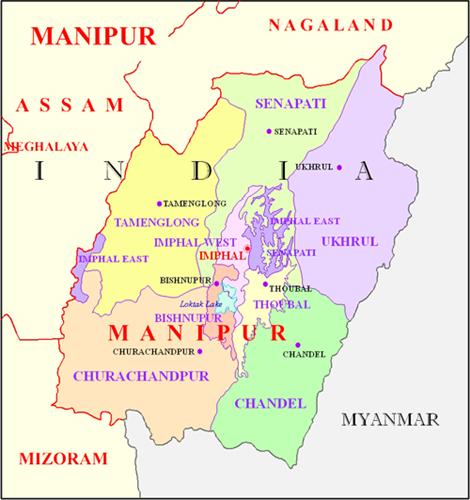 The climate of Imphal is sub tropical or a humid sub tropical in nature. The winters are very cool and dry while summers are hot and humid. The minimum temperature of the region is 4° C and maximum is 25° C. Imphal faces an average rainfall of 1320 mm.

The summer’s in Imphal starts from the month of March till May. The average temperature during the summer is 28 degree Celcius.

Winters here starts from November and continues till February. During winter, the region experiences an average temperature of 8 degree Celsius and sometimes plunges below zero degree celsius.

The climate in this region is similar to the Himalayan region, as the hills are actually an extension of the Himalayas. January, is the coldest month, as cold winds freeze the atmosphere. The monsoon season generally starts from the month of May and continues till the mid of October.

Imphal is rich in flora due to its good monsoon season. One can find different kinds of flowers, trees and plants in the hills of the region. There are around 500 types of orchids and out of that 472 have been identified. The region is popular for the lily that is known as the “Siroi Lily” that are found in the forest of the hilly region. The varied flora add to the beauty and charm of the place.

Due to the presence of the typical climatic condition, animals of different species can be found in abundance. Some of the prominent species found in this region are: Horn bills, Clouded Leopard, Blyths Tragopan, Burmese Pea-fowl, spotted Linshang, Hoolock Gibbon and slow Loris. The Sangai or the dancing deer is another distinct fauna of the state. Sangai is recognized as the stata animal. Other very rare species of animals that can be found here are Salamander, hog deer, Sambar and Muntjac.